Wills Recognized with Circle of Excellence

Wills is honored with five other watershed coordinators who are also receiving a 2021 IAWA Iowa Watershed Award. The recipients were announced at the 2021 Iowa Water Conference.

Progress continues on Iowa’s Great Lakes, even during a pandemic 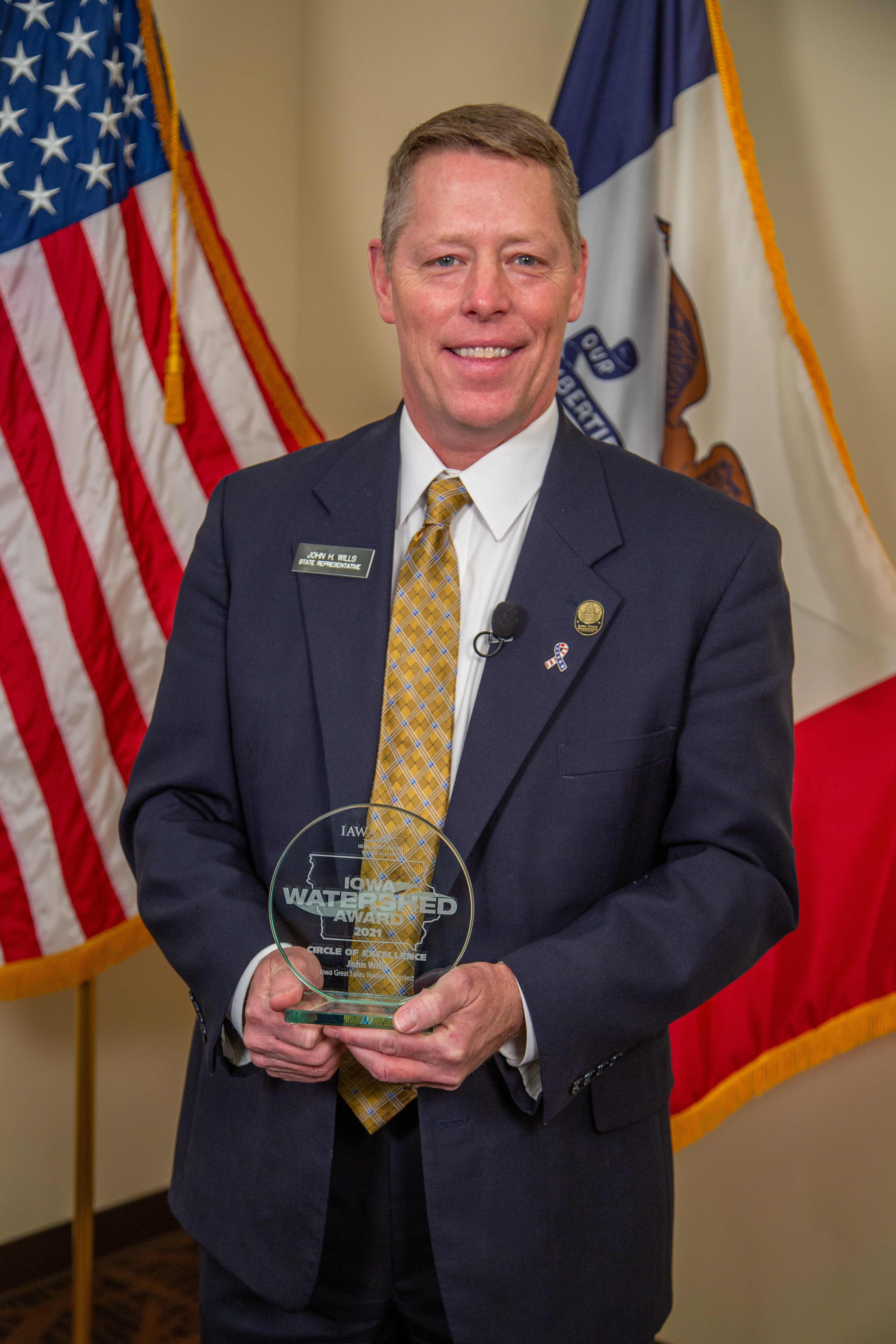 This is the second year in a row that Wills has earned this award. The goal of his project is to get one of the smaller of Iowa’s Great Lakes, Lower Gar, off the state’s impaired waters list.

All of the area lakes drain into shallow Lower Gar before it empties into Milford Creek and the Little Sioux River. With a depth of little more than six feet, Lower Gar has a problem with summer algae blooms.

“Everything we do above Lower Gar will impact and improve that lake,” Wills says.

The chain of Great Lakes does a good job of naturally removing nitrate, but Lower Gar is impaired by too much phosphorus, which increases algae growth. Phosphorus naturally binds to soil particles that wash into the lakes.

Even during the pandemic, Wills’ project made great progress in 2020.

“It didn’t stop us in our tracks as I thought it would,” Wills says.

Wills and his partners began constructing a $1.3 million stormwater wetland near East Okoboji that’s scheduled for completion in July. The eight-acre wetland swells to 10 acres during storms. Each year it will stop more than 300 tons of sediment and 179 pounds of phosphorus from reaching the lake.

“It may be the largest stormwater wetland in the state,” Wills says.

Progress was also made on shoreline restoration at Angler’s Bay on Big Spirit Lake, with work conducted in early February on frozen ground in order to protect buried native American artifacts.

Besides such big-ticket projects, Wills works with many farmers and landowners on installing prairie strips of native grasses and forbs that are 95% effective at reducing soil erosion, even during a heavy rain and eliminate phosphorus and nitrogen losses by 77% and 70%, respectively, while providing habitat for Monarch butterflies, other insects and pollinators and birds. Farmers are also using no-till, cover crops, and fertilizer management to protect the watershed.

The Iowa Great Lakes are also urban, with a population of residents and summer vacationers that can swell to 120,000. Wills also encourages soil quality restoration, shoreline restoration (both urban and rural), and permeable pavers.

Many of the events and field days Wills would normally plan didn’t take place in 2020, but he was able to meet with his partners on the land.

“I think I still visited the same number of people I normally visit,” he says. “You’re outside and if you need to social distance, you can do that.”

Wills’ watershed project works with more than 80 groups and organizations but last year he added four new ones: Ducks Unlimited for a land acquisition, Jackson County (MN) Drainage Authority to help build side inlets and restore an oxbow wetland, implement shoreline protection for Imagination Iowa Great Lakes, repair and improve an urban bio-retention cell along a shoreline near a condominium association.

Wills grew up in nearby Sibley, Iowa, and began working in the area in 1993 as a Clean Water Alliance Coordinator. That job still takes a third of his time. Another third goes to his work as the Great Lakes Watershed Coordinator. In the remaining time, he serves as Speaker Pro Tempore of the Iowa House of Representatives, which ranks behind only the Speaker of the House.

Wills’ work as coordinator is funded by an EPA Section 319 grant through the Iowa Department of Natural Resources (DNR). He also works with the Dickinson Soil and Water Conservation District and has helped form the Little Sioux Headwaters Coalition, a Watershed Management Authority which encompasses the Iowa Great Lakes.

To help maintain momentum for this work, Wills will receive funding through the Iowa Watershed Award to apply to the Iowa Great Lakes Project as well as funding for his own professional development.

The IAWA Iowa Watershed Awards program was developed by IAWA in partnership with Iowa State University Extension and Outreach, Conservation Districts of Iowa, the Iowa Department of Agriculture and Land Stewardship, and the Iowa DNR.