Shaffer receives the top honor along with five other watershed coordinators who are recognized by IAWA for their multitude of contributions and steadfast dedication to improving water quality across the state.

A Watershed That Keeps Getting Better

Thanks to Shaffer and the landowners he works with, water quality in the Silver Creek Watershed has improved enough to support native Pine Creek brook trout. Three years ago, the Iowa Department of Natural Resources (DNR) stocked 700 fingerling trout in a tributary in the watershed, Mullen Creek. Last year, fingerlings were found in the creek — a sign that the population is self-sustaining. 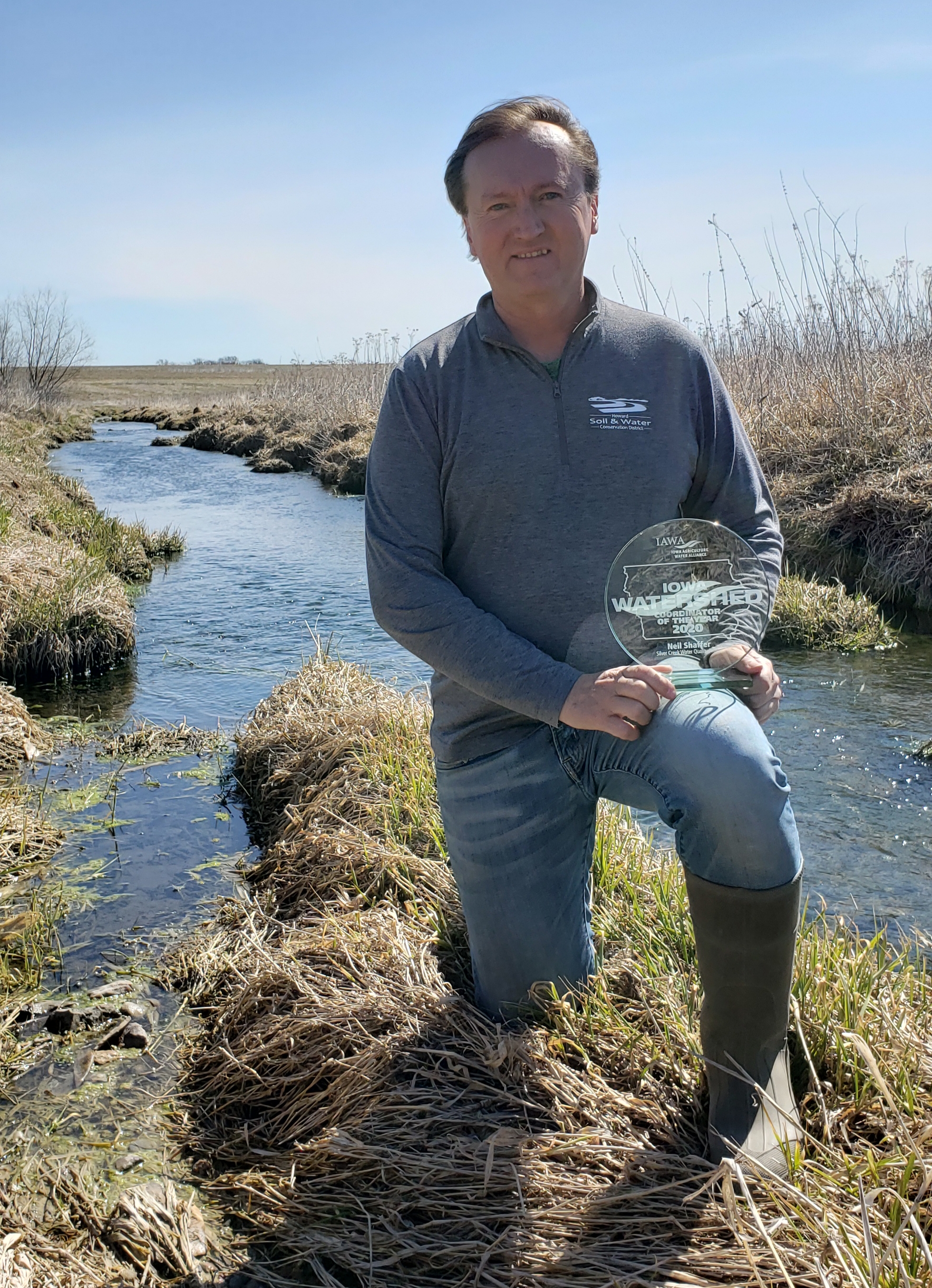 “We were extremely excited to see that,” Shaffer says. “It’s been 40 years since we had trout in Silver Creek.”

According to the Iowa DNR, brook trout are highly sensitive to siltation and poor water quality – frequent problems in agricultural watersheds. Their return signals the success of nearly the entire community in restoring the watershed.

This did not come quickly or easily. Shaffer’s leadership began when he was hired by the Howard County Soil and Water Conservation District 19 years ago to promote buffer strips. His work ramped up even more when he became watershed coordinator in 2013.

To date, the watershed has invested more than $6.4 million in conservation. More than 70% of operators in the watershed have participated in the project by applying practices.

To prevent that, the project has deployed an arsenal of conservation practices. Cover crops are planted on nearly 35% of the watershed and Conservation Reserve Program (CRP) native grasses are seeded on almost 15%. That means that at least half of the watershed has roots holding soil year-round, Shaffer says.

Landowners have also added 30 miles of grassed waterways on their fields, installed 3,679 feet of stabilization along stream banks, and led the state in participation in the Conservation Stewardship Program (CSP), which allowed some to experiment with cover crops. Seven farms have built livestock waste storage facilities and 20 septic systems have been upgraded.

The results of this work: a reduction in sediment of 23,547 tons per year along with 27,175 fewer pounds of phosphorus entering the watershed.

When asked what he enjoys most about his work, Shaffer mentions four things. First is bringing back the trout. Second is working with dairy farmers on manure handling and nutrient management along with building waste storage.

“It improves their daily life and the comfort of the animals,” Shaffer says. “Being a dairy farmer myself, I find a lot of satisfaction in that.”

Third is seeing the improvement in soil health that follows the use of cover crops and CRP native seeding.

Last but not least, Shaffer enjoys working with interns, including four last year.

“We put them in charge of pretty much everything,” he says. “The district has always been very supportive, and I’ve been able find grants to mentor the next generation of conservationists.”

At the top of his list of partners are farmers and landowners. They all have his phone number and call him at any time with questions. “Without their cooperation and participation, none of this would be possible,” he says.

To help maintain momentum for this work, Shaffer will receive funding through the Iowa Watershed Award to apply to the Silver Creek Watershed Project as well as funding for his own professional development.