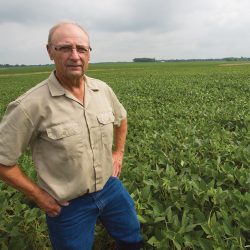 Wayne Fredericks, a strong conservationist and former president of the Iowa Soybean Association, began no-till soybean planting in 1992 and started strip-tilling corn in 2001.  He began testing strips of cereal rye cover crops in 2012 on his farm near Osage in Mitchell County. Last fall, he seeded rye ahead of all of this year’s[…]