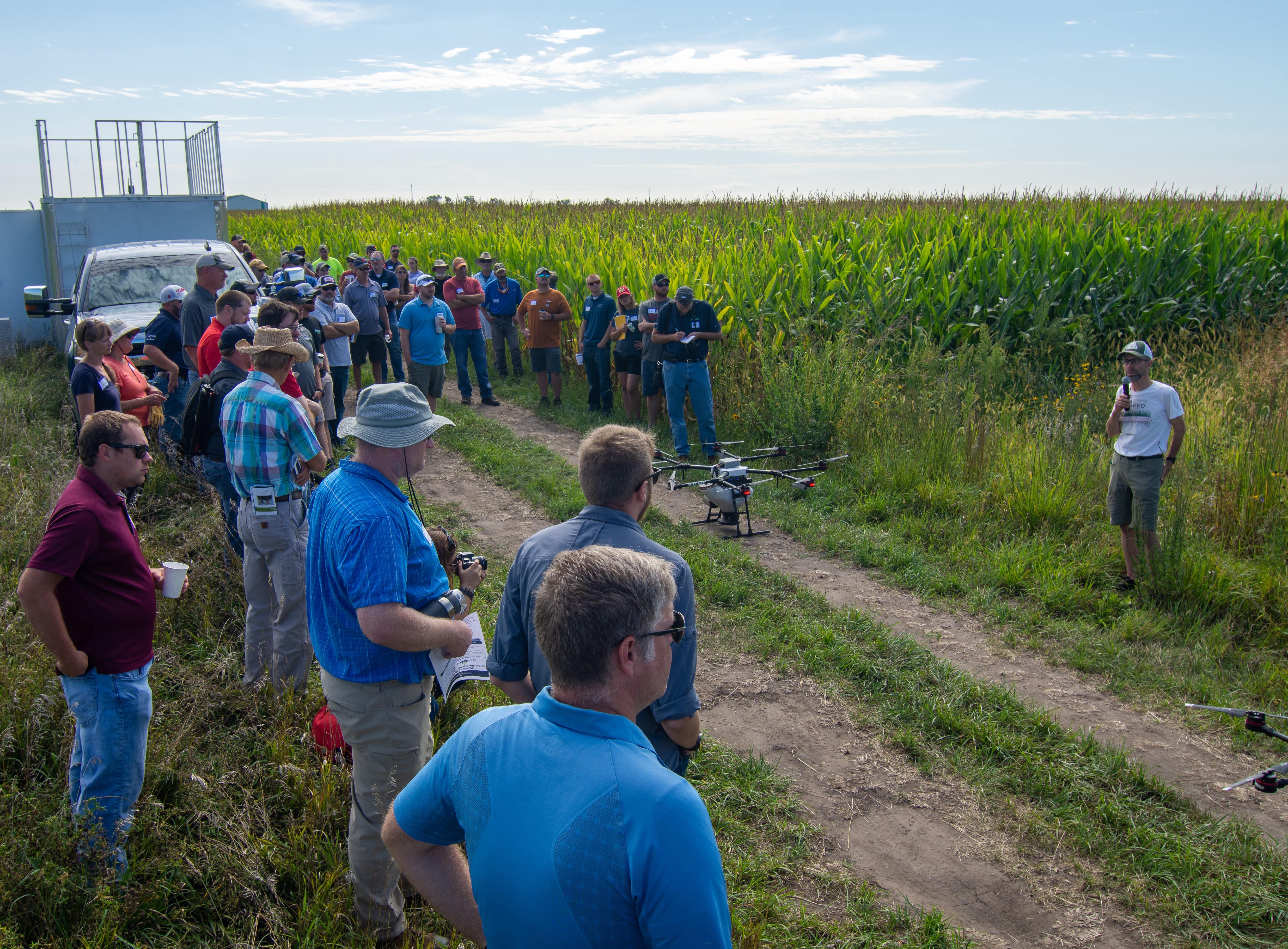 Lee Tesdell isn’t shy about his passion for conservation innovation as the sustainability caretaker and non-farming landowner of Tesdell Century Farm near Slater, Iowa. Attendees at one of his dozen or so field days have learned about valuable tools and teamwork with his tenant farmers over the past decade.

In August, nearly 100 farmers, landowners, and conservation advocates lined their pickups along the gravel road of this 137-year-old, fourth-generation family farm to examine Tesdell’s second and third saturated buffers recently installed to reduce nitrate from tile water. Attendees were also captivated by a trio of drones seeding cover crops.

The quick takeaway from that day: his 2017 installed saturated buffer removes 90% of the nitrate from his tile water; his nine-year-old woodchip bioreactor is still removing 58% of the nitrate from tile water, and his Rantizo demonstration of a three-drone swarm seeding a three-way mix of cover crops achieved successful growth before harvest.

Partnership with farmers and society

Tesdell is thankful that his farmer tenants of more than four decades, Charles and Mike Helland, are long-time no-tillers who value conservation and working together to improve the land. Over the years, this partnership has collaborated on riparian buffers, saturated buffers, terraces, prairie strips, and cover crops to improve soil health, water quality, and wildlife habitat — without impacting profitable crop production.

This working partnership for the long-term sustainability of his land led to Tesdell receiving the Practical Farmers of Iowa (PFI) Farmland Owner Legacy Award in 2019. Both parties benefit — the Hellands gain insight and a working knowledge of conservation tools they can apply on other farms and Tesdell achieves reduced soil erosion, improved soil health, and a farm that is more resilient to extreme weather, in addition to cleaner water going downstream.

Both partners realize the edge-of-field (EOF) conservation practices don’t grow more crops, but they improve the tile water quality before its release into Fourmile Creek, leading into the Des Moines River. “We’re trying to be good citizens by keeping nutrients on the farm, which helps cities and towns spend less money to distribute clean drinking water,” Tesdell adds.

“The level of partnership and communications that Lee and the Hellands demonstrate, and their mutual commitment to conservation, are models for other landowners and farmer tenants to follow,” according to Sean McMahon, Executive Director of the Iowa Agriculture Water Alliance. “Structural practices that take land out of production require decisions by landowners, so we encourage farmers to initiate those conversations with their landlords.”

At the field day, Tesdell encouraged attending landowners and farmers to talk with neighbors and work with their county SWCD to install multiple saturated buffers and bioreactors. “We need to step beyond the field day idea and work together in teams to take the next step and get organized to put many of these practices in place to truly make a water quality difference.” 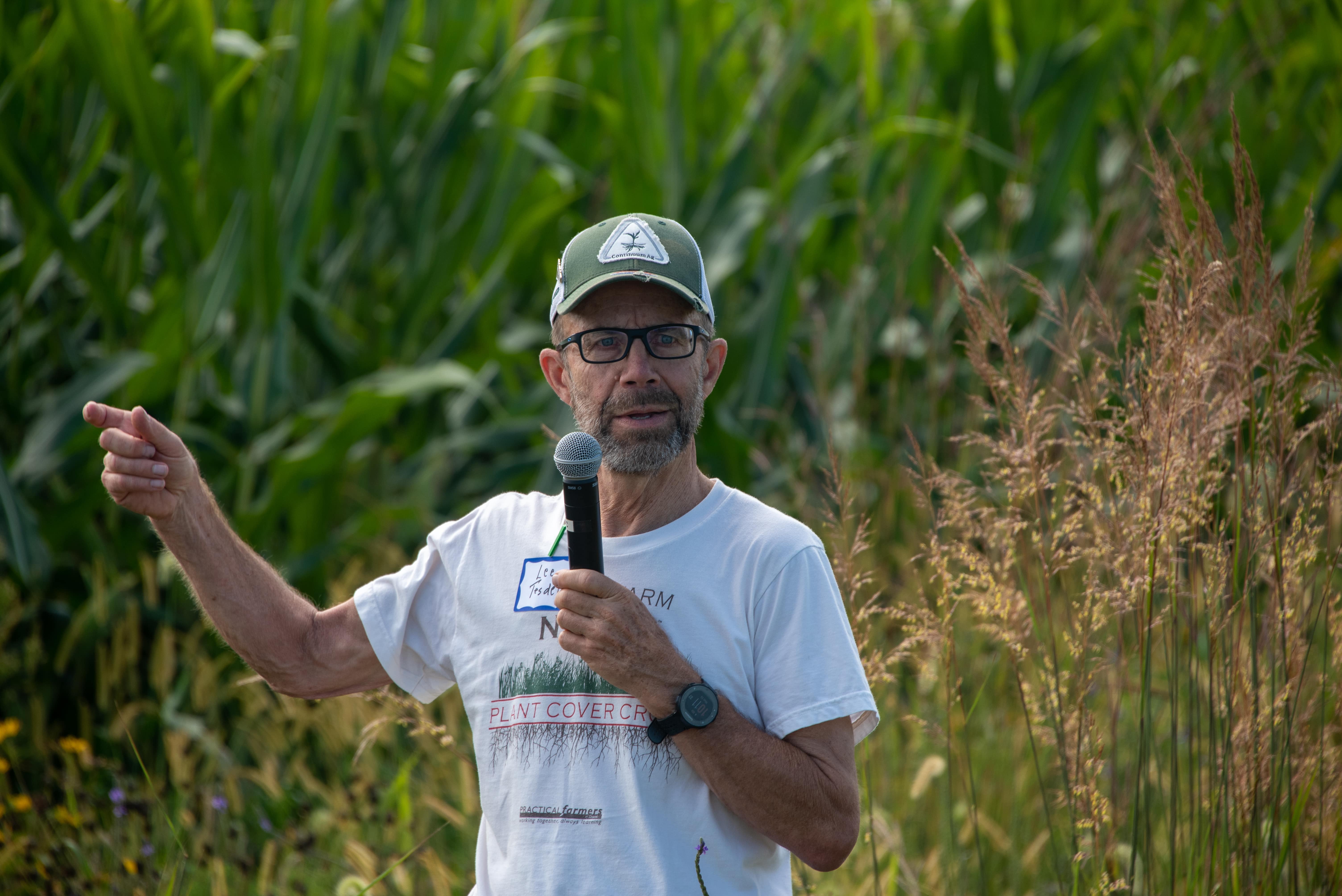 Polk County SWCD commissioner John Norwood described this vision of a scalable process to field day attendees. “We have created a team of passionate public-private conservationists that built a process to remove landowner barriers, which helped us install 51 edge-of-field practices this summer in Polk County,” he says. “We hope to double or triple that number of installations during 2022 as more counties in this watershed adopt this model, all to help meet the Iowa Nutrient Reduction Strategy.”

Since tile lines can cross farm boundaries, Tesdell’s saturated buffers help clean a portion of neighboring fields, too. “It was great to see the cooperation among landowners and the Polk County SWCD did a great job signing up many in this area to allow installations,” he says.

Another attraction at the field day was a cover crop seeding by three drones from Rantizo. Tesdell and the Hellands had 30 acres seeded with the drones, applying a rate of 20 lbs. oats, 20 lbs. cereal rye, and 2 lbs. camelina per acre. 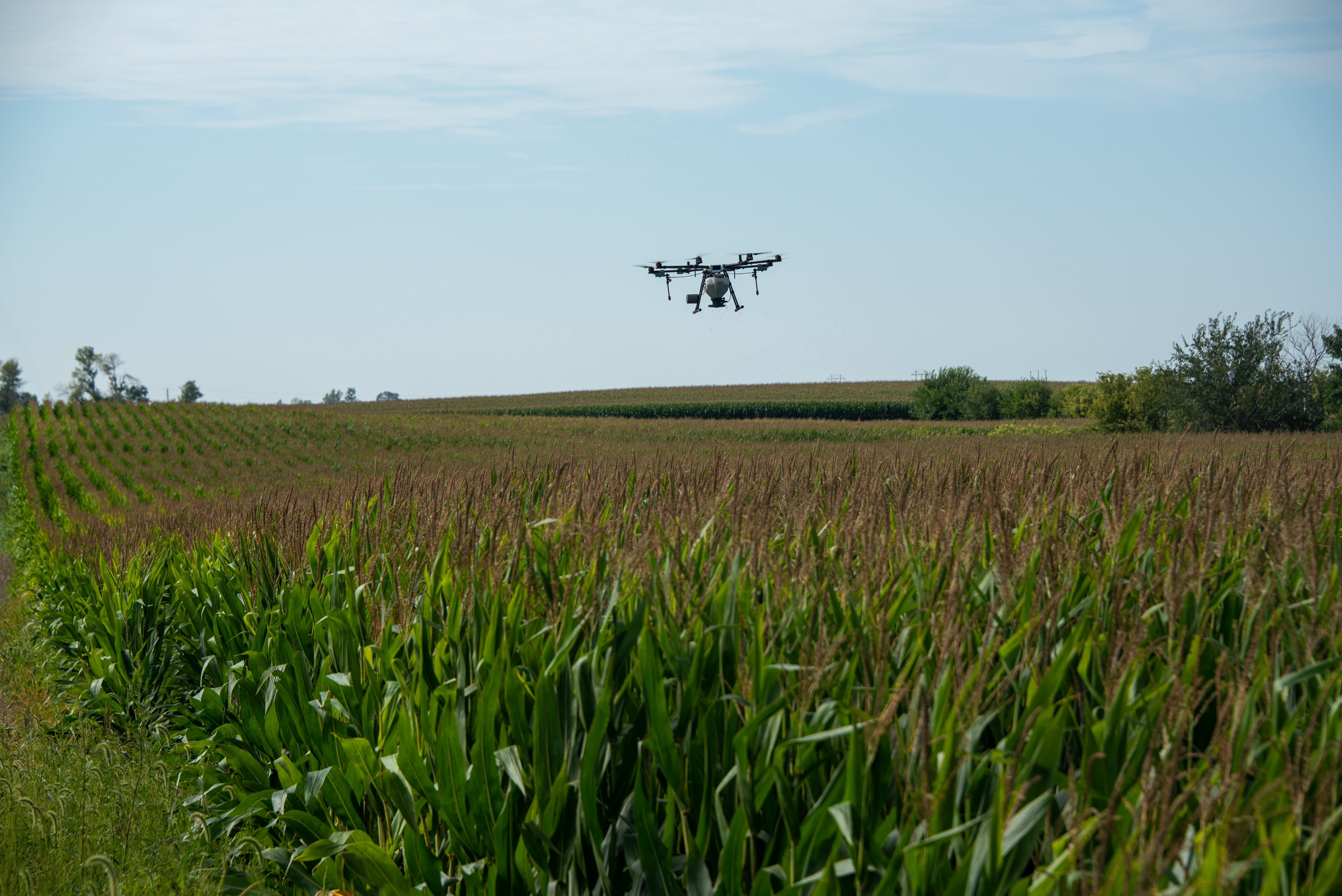 “Since the seed tank on each drone holds 20 lbs, it takes a lot of refill trips and time to seed an area,” Tesdell shares. “Due to this limitation, I cut my normal seeding rate down from 40 lbs. of both oats and cereal rye to save time. Fortunately, we received 1.5 inches of rain after application and saw good cover crop growth.”

The Hellands have been seeding cover crops for more than a decade, where they split the bill 50-50 with Tesdell on cover crop seed. Tesdell believes landowners should share in the cost of conservation practices with their tenants because it helps improve the land investment and adds to the soil biology that enhances crop production for the farmer.

As this landowner/tenant partnership continues to build for the future, Tesdell believes changing practices and crops will be essential to sustain a food production system beyond corn and soybeans. “Working with the Hellands and my two sons, Omar and Ramsey, we’re constantly thinking about ways we can improve both economically and environmentally. We know working a small grain into the mix is important. That’s why we’re going to try growing some perennial Kernza next spring,” he says.

Kernza is an intermediate wheatgrass developed by Kansas-based The Land Institute, now working on its genetics with the University of Minnesota. As a perennial grass and cousin of annual wheat, it offers regenerative soil health benefits and carbon sequestration, requires less fertilizer and little to no herbicides while providing wildlife habitat.

The grain it produces offers a sweet, nutty flavor used in baking and cereal products, attracting the attention of companies like General Mills. “We have a local demand for it by beer breweries, so we’ve decided to explore its fit into a corn and soybean rotation and how to process it for local sale,” he adds.

It was easy to sense Tesdell’s passion for sharing his conservation innovation at the field day and the desire to pass his sustainability legacy on to his grown children and their partner farmer tenants. “It’s this sense of collaboration among landowners, tenants, and local watershed conservationists that gives me hope for a future that can benefit farmers and society,” he shares.