Growing Commitment to Conservation Across Iowa

In a few years, even a casual visitor crossing Iowa on its interstates could see dramatic signs of a growing commitment to conservation. Starting in August cover crops will be sown from the air. An estimated 300 aircraft could fly seven days a week to help meet the demand. Later in the fall those covers of cereal rye, radishes, clovers and more will green some 12-to-17 million acres across the landscape. Drive into the state in any month except winter and you could see one of the 88 semis that will be hauling wood chips daily. These wood chips will fill the trenches of new bioreactors.

Experts foresee an estimated 12,000 bioreactors and other conservation drainage practices under construction every year for 10 years. And then there’s maintenance to ensure effective operation. All of this is called for as Iowans strive to meet the goals of the Iowa Nutrient Reduction Strategy.

Today, visitors pass forests of wind turbines and ethanol plants venting steam. These are signs of a renewable energy industry that has benefitted the state’s economy. Tomorrow, a group of visionary agribusiness leaders expects even more opportunity. Further, this opportunity is for farmers and rural Iowa from the state’s Nutrient Reduction Strategy. As a result, to meet the Strategy’s goal of reducing nitrate and phosphorus in the Iowa waterways by 45 percent, the state will need a burgeoning network of agronomists, engineers, cover crop seed dealers, seed cleaners and more.

As Iowa moves into the next phase of improving water quality, the new Iowa Agriculture Water Alliance (IAWA) Business Council aims to increase the pace and scale of the work needed to support efforts already being led by farmers. They are joined by the Iowa Department of Agriculture and Land Stewardship and Ray Gaesser, past president and Chair of the American Soybean Association. Ag Secretary Bill Northey and Gaesser will co-chair the effort that includes IAWA’s Advisory Council and new Business Council.

Dan Foor, CEO of La Crosse Seed, is the Business Council’s chairman. He compares the scale of this undertaking to the creation of the nation’s Interstate Highway system in the 1950s. Like this undertaking, the conservation infrastructure work is about adjusting to the ever shifting economic and societal needs. Though unlike constructing a network of interstates, the nutrient reduction strategy is more than a government project.

“The question the Business Council will focus on is: 'What are the most viable ideas for market-based solutions to increase the adoption of conservation practices?' We can’t rely just on public funds,” Foor says. “To compliment the public efforts underway, we need private engagement.”

More than anything, though, the ramping up of Iowa’s newest conservation effort will come from a broad swath of experts working in a coordinated fashion. “We can’t just have everybody working in isolation,” Foor commented. “It’s got to be the whole community. Which should be reasonable given our common objectives.”

Farmers are leading cover crop expansion. The 2012 Census of Agriculture found 10 million acres of cover crops nationwide. That has grown by several more million acres. This is according to a survey released in July by USDA’s Sustainable Agriculture Research and Education (SARE). In Iowa, some 500,000 acres are benefitting from cover crops. Farmers who responded to a SARE survey this year expected to plant an average of 339 acres of cover crops in 2016. This is double the amount reported in 2011.

Foor says the survey results also reflect the view that many farmers believe “this soil that is part of my land is my asset, and I hope to pass it on to future generations.”

Not all conservation practices that reduce nutrient loss directly benefit a farmer’s land. Bioreactors at the edge of a field can sharply lower nitrates leaving it. But the main benefits are downstream. Foor believes the farmers who have already installed about 60 bioreactors in Iowa find other benefits.

“There’s a curiosity. There are folks that like to tinker and be on the leading edge of technology,” he says. In the future, there may be other economic advantages for farmers, Foor says.

“Who knows, in five or 10 years, we may see cover crops that could double as energy crops or provide other feed, food or fiber benefits,” he says.

One big barrier to adoption of the new nutrient management technologies is that farmers in Iowa own less than half of the land they farm. The SARE survey suggests that’s an obstacle nationwide. Farmers using cover crops now plant them on about half of their own acres, but only about a third of rented land.

Foor thinks the council can help in that area, too. “Some of its members are already working with landowners,” he says.

The Nutrient Reduction Strategy envisions spending billions of dollars over what may be several decades to reach its goals.

Foor is more optimistic that the process will be much faster.

“There’s been a lot of optimism in the group that the targets are achievable,” he says “and the IAWA Business Council is ready to roll up our sleeves and help make it happen.” 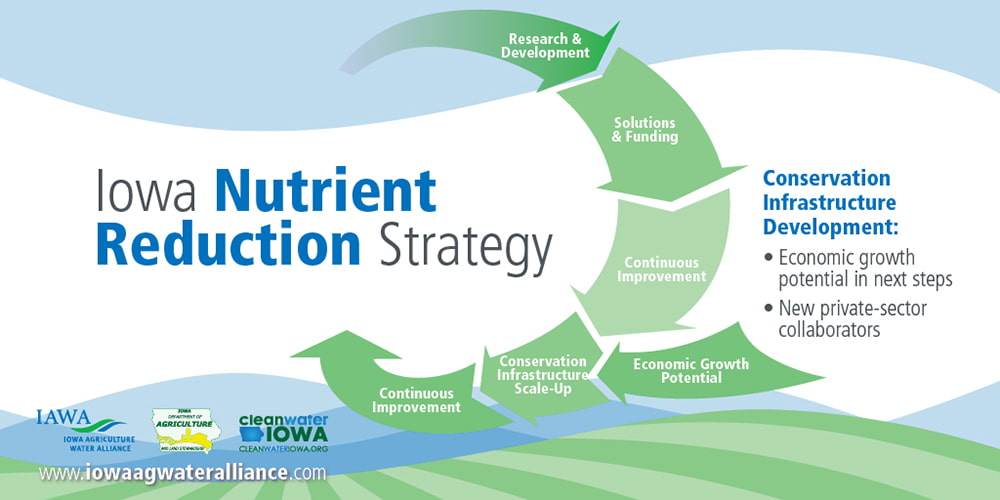